What determines the pull of a magnet?

The Remanence Br determines the magnetic pull, generally the larger the remanence the stronger the pull.

What determines the amount of magnetic material I need for my application?

What determines whether a magnet will stay magnetised when I use it?

The Coercivity Hc shows this. The larger the coercivity, the stronger is the magnet’s resistance to demagnetisation.

What is in our permanent magnets?

NdFeB magnets represent the latest and most significant development in permanent magnets for decades. Their superior magnetic properties are represented in these graphs. 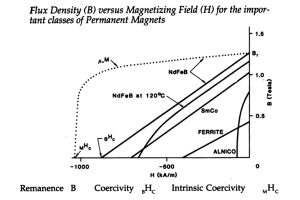 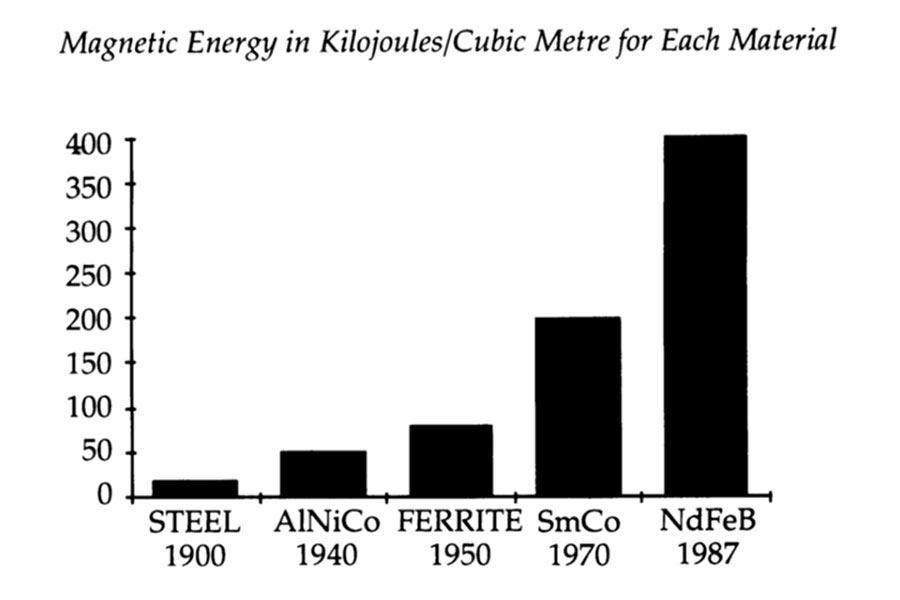 Why use Neodymium magnets?

Because they have the highest remanence, coercivity and maximum energy product of all commercially available magnets. Which with these properties are proven to have the strongest pull, and the strongest resistance to demagnetisation, with the least amount of material needed that is available commercially.

What are some applications of permanent magnets?

The range of products which can benefit from the use of permanent magnet materials such as NdFeB (Neodymium Iron Boron) is enormous. We have already seen smaller, lighter, and more efficient units designed for applications in industries such as:

How are rare earth magnets manufactured?

The other process used widely is a classical powder metallurgical process. Cast alloy slabs, produced from molten alloy of the right composition are crushed mechanically to minus 3 mm in size and then milled to 3-5 µm powder.

Whilst the basic process appears simple, in practice very strict controls at every operation must be maintained. Powder of the alloy is extremely pyrophoric, bursting into flames in contact with air. All operations must be carried out under inert atmosphere. Even a minute presence of oxygen will render powder useless. Other important parameters are particle alignment, particle size distribution and sintering parameters.

How should permanent magnets be designed?

A few basic and often simple alterations to a magnetic circuit could result in a dramatic improvement in the results achieved from magnets.

How is the force of a magnet calculated?

The following example illustrates how a simple change in the magnetic circuit increased the lifting force of a magnetic device by a factor of 15.

Let us consider the situation where a lifting device is made using the same magnet in two different arrangements. The magnet selected for the example has dimensions of 25.4 mm x 25.4 mm x 5 mm.

The first example shown in figure A utilises a single magnet with one pole face secured to a lifting attachment which is connected to a spring scale to measure the force on the magnet. The other face of the magnet is placed on a solid steel plate which is secured to a bench. The magnetic field holds the magnet to the steel plate. 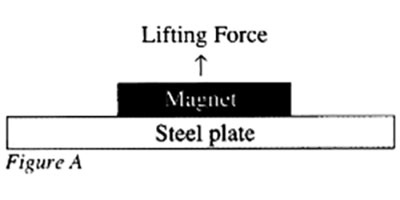 Figure A. Single magnet with one pole face secured to a lifting attachment

The magnetic force holding the steel plate to the magnet can be measured on the scale. The approximate force can also be calculated using the following formula:

where Bm is the magnetic flux density and Am is the area of the magnet contacting the steel plate (6.45 x 1O-4 m2). In this example the force of attraction is 41 Newtons. Bm would be about one third of the magnet’s maximum flux density of 1.2 Tesla because of the large air gaps in the circuit, say 0.4 Tesla. 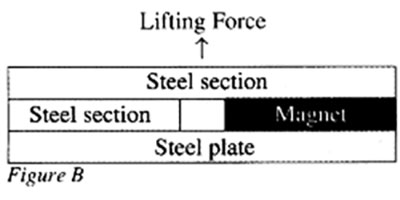 Now the pulling force can be calculated using both surfaces contacting the steel plate with the following formula:

If we assume that Bm is equal to Bs and that As is equal to Am then the force will be 621 Newtons, which is approximately 15 times that of the original example.

So, 15 times the force without increasing the size of magnet.

If you’re looking to purchase rare earth magnets, head to our shop, or fill in our magnet enquiry form. Alternatively, simply chat with us, we’d be happy to discuss your needs with you.

close
Start typing to see products you are looking for.